Modern PC games and streaming apps like XSplit Broadcaster requires the use of your system resources to function. In some cases, running both streaming and gaming processes on a single computer may impact your stream or game's overall quality, resulting in frame drops, lags, artifacts, and more. A popular solution that many professional streamers have known for quite some time is to set up 2 separate computers: One for streaming, and the other for gaming. This allows each system to focus their CPU/GPU/Encoding processes on just one application, which improves their performance and overall quality. Hardware Requirements Software Requirements Connecting the Computers Using an External Capture Card Using an Internal Capture Card Adding the Capture Card as a Source in your Streaming PC

The scenarios mentioned in this article are based on common ports and connections available in most capture cards and computers. Please refer to your capture card's instruction manual to know which methods will apply best to your current setup. 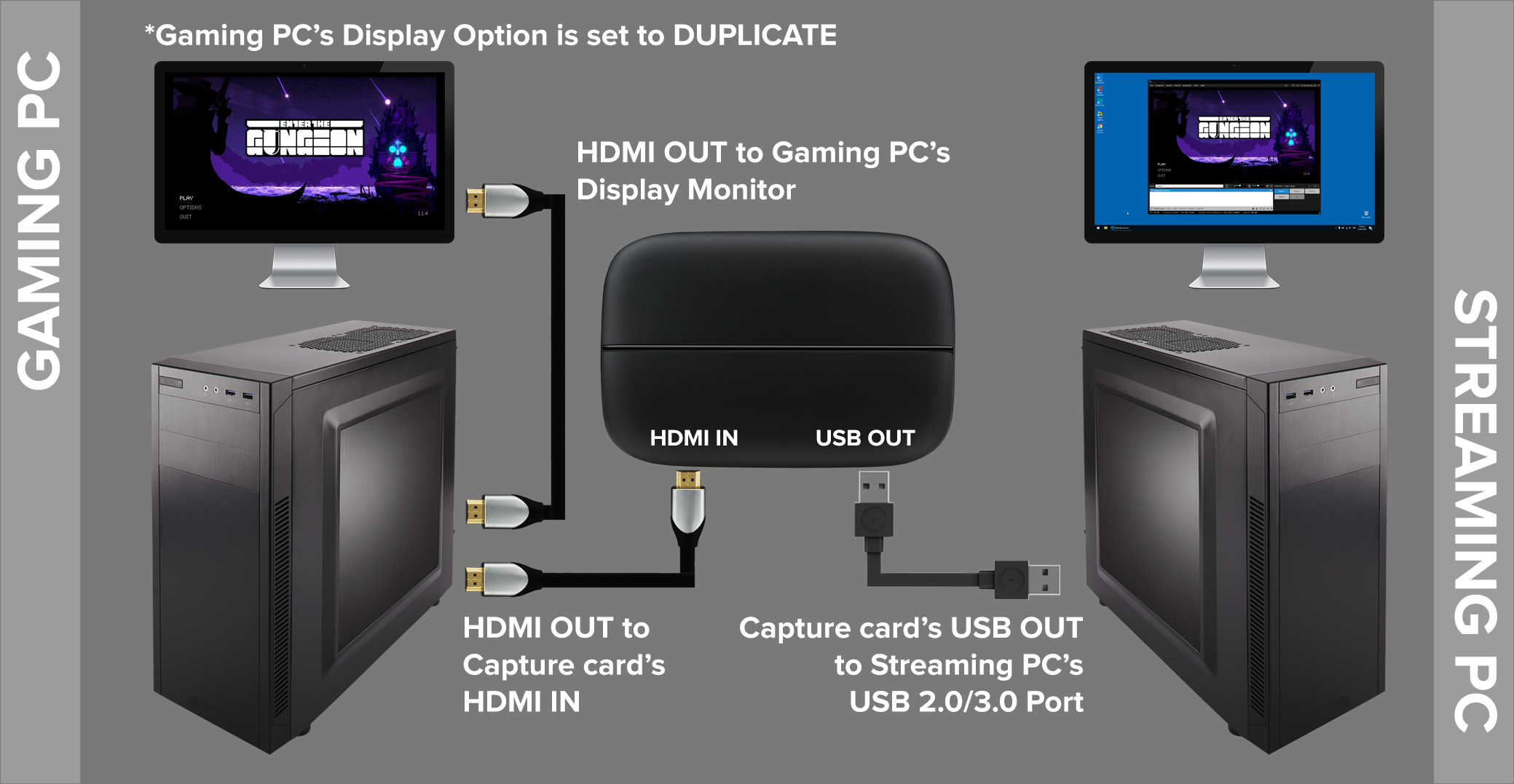 METHOD 2: Laptops as Gaming PCs - It's common for laptops to have a single HDMI OUT port. Similar to Scenario 1, you will need to change your Gaming PC's Windows display option to Duplicate. 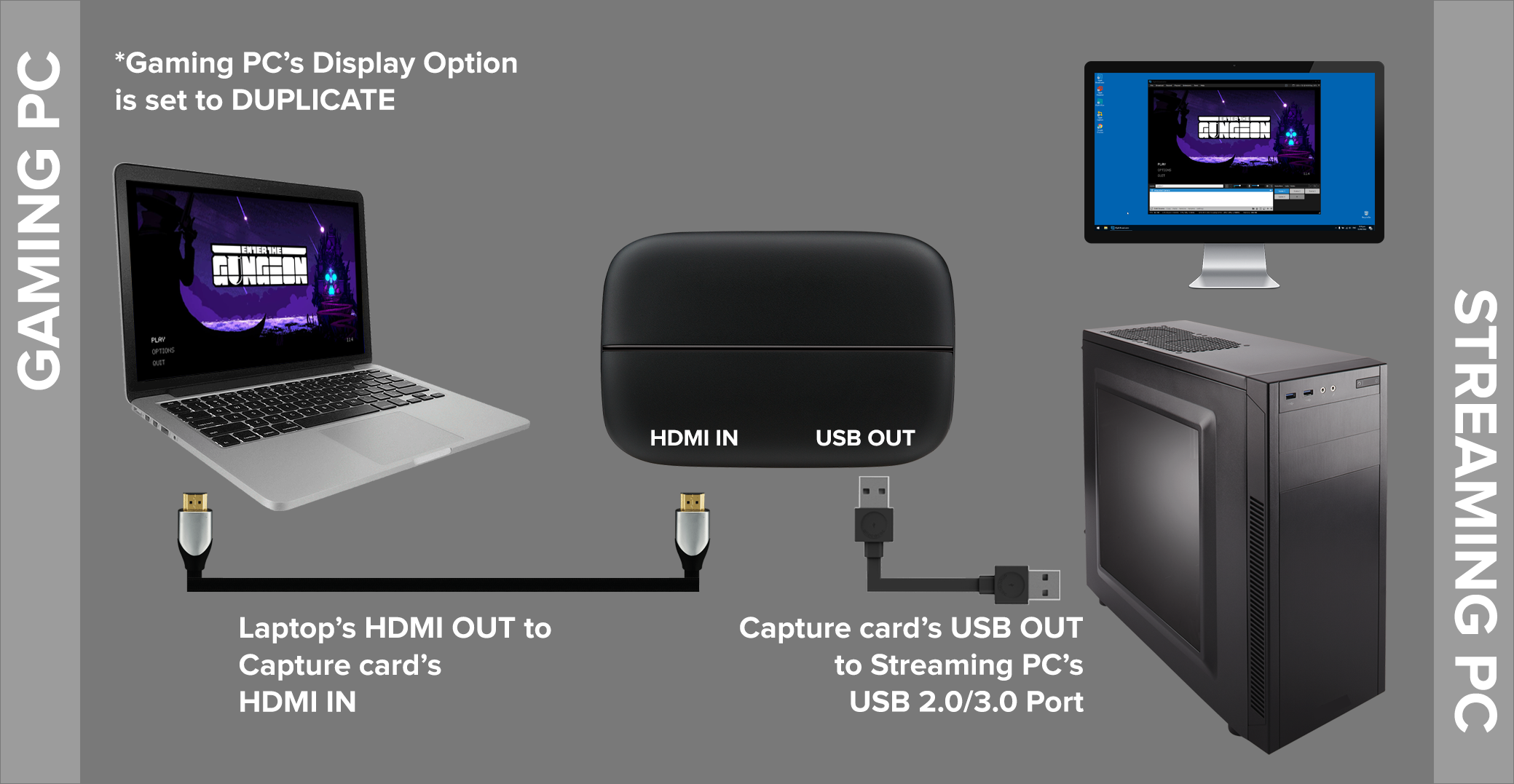 METHOD 3: Some capture cards have a Passthrough port, which acts as a VIDEO OUT. You can connect your display monitor here instead if (1) Your Gaming PC does not have enough HDMI OUT ports or (2) If using Duplicate as your Windows display option is causing issues. You will, however, be limited to your capture card's video maximum specifications when viewing your games via passthrough. 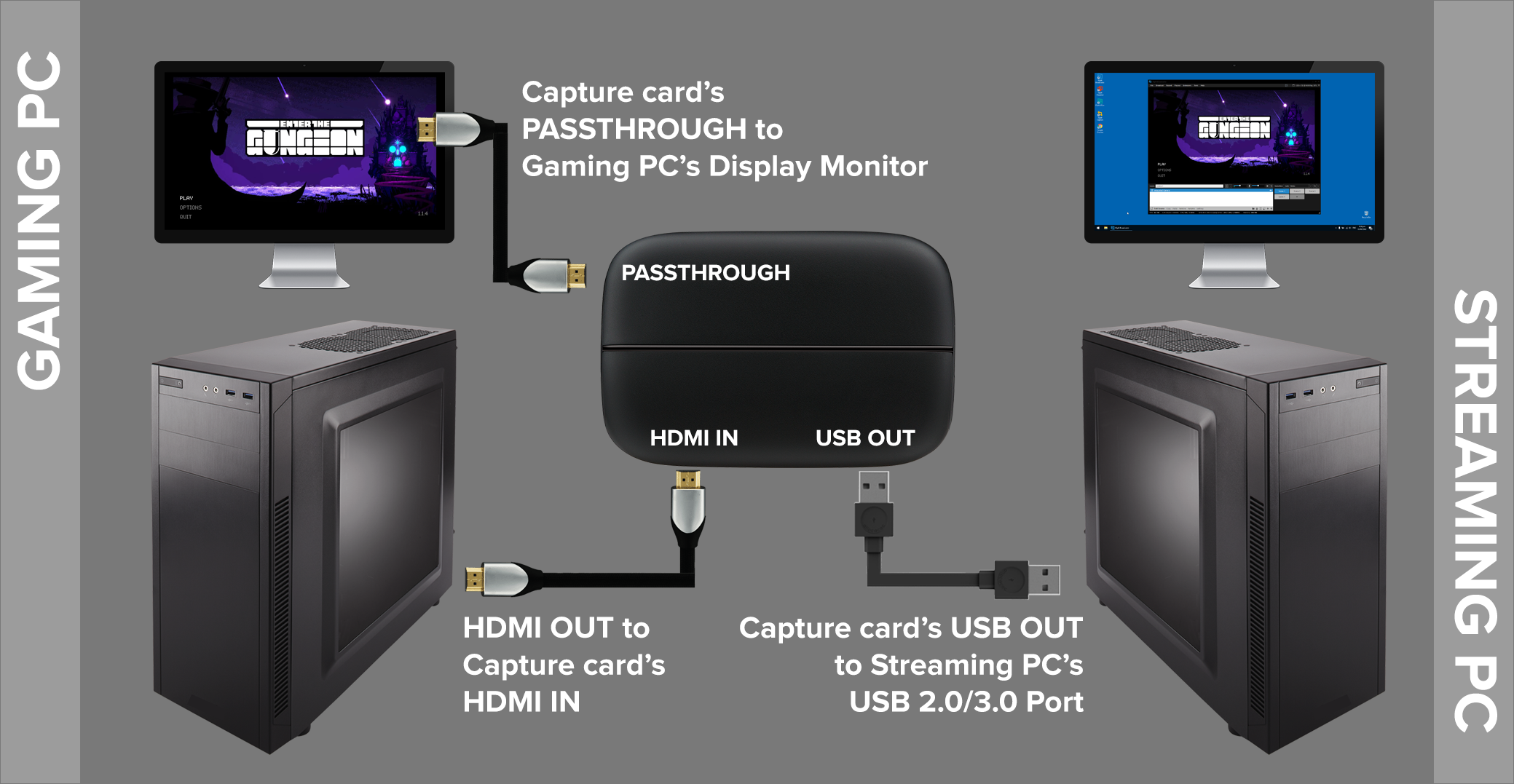 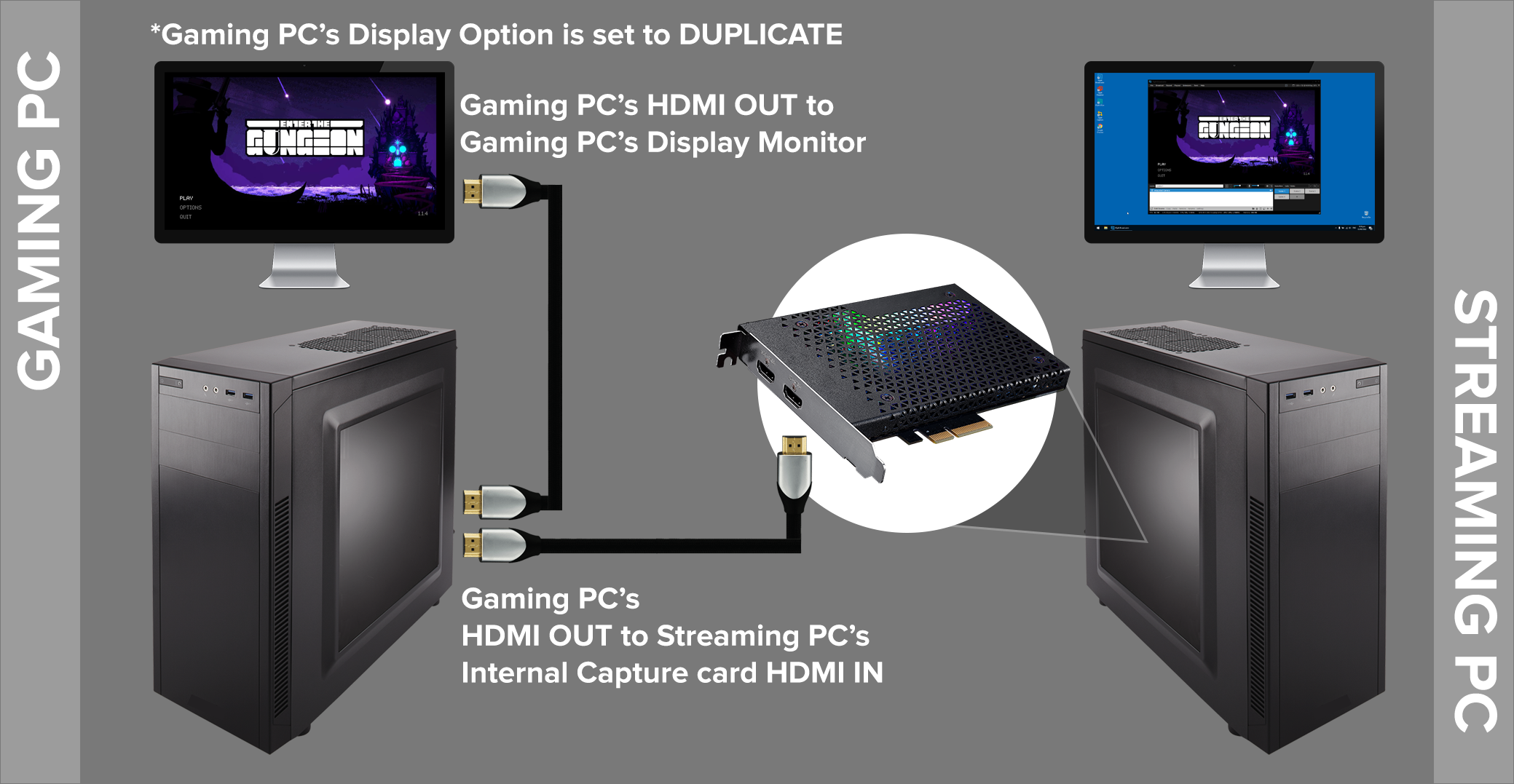 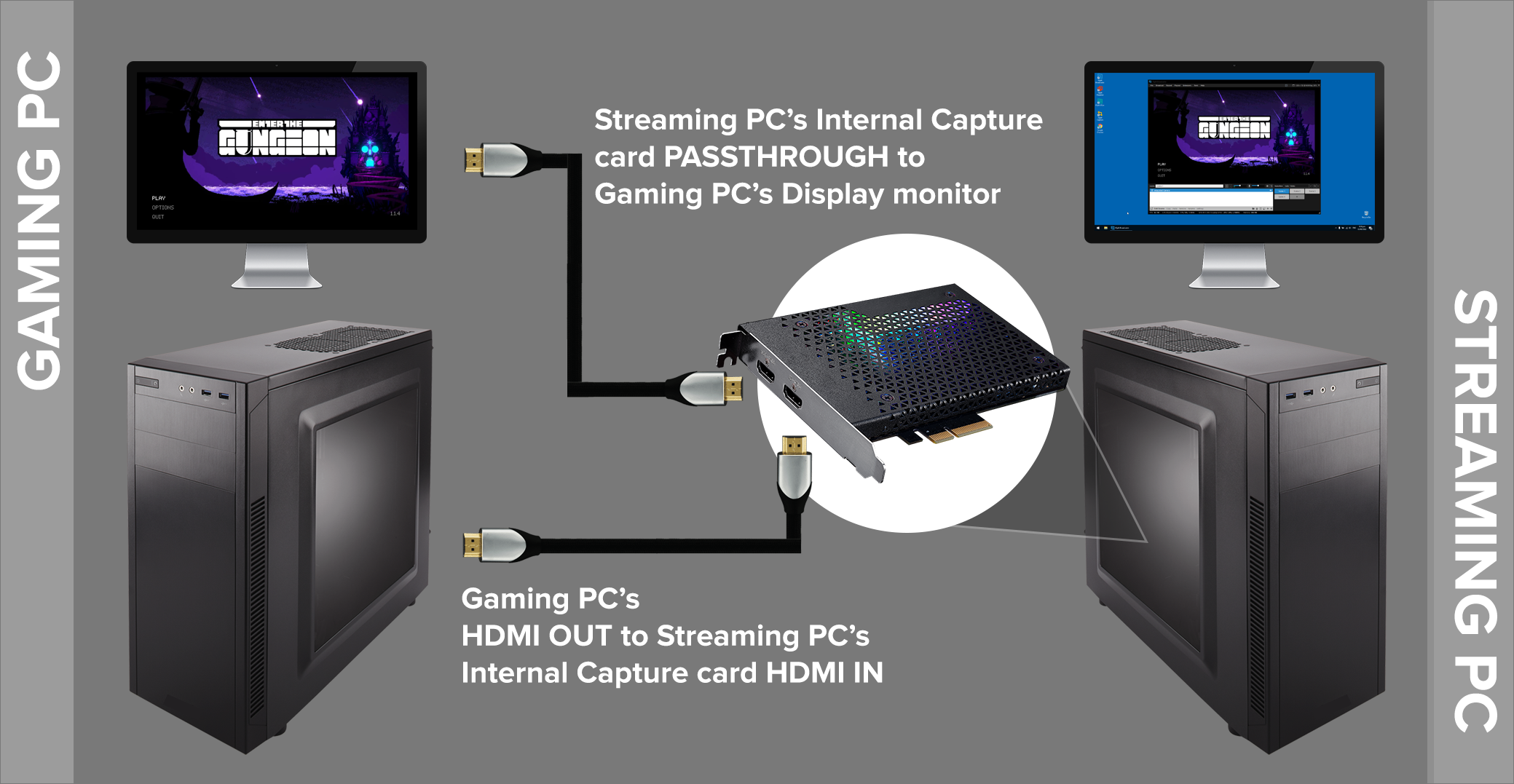 Adding the Capture Card as a Source in your Streaming PC

Confirm that all cable connections are correct, then turn on both computers.Run XSplit Broadcaster from your Streaming PC, then go to Add Source > Devices > Video > select your capture card from the video devices list.

Your Gaming PC's display should now be shown in the XSplit Stage as a video source. You can resize this window to your liking.Congratulations! You have now successfully setup your computers for Dual PC streaming/recording using your capture card!

Was this article helpful?